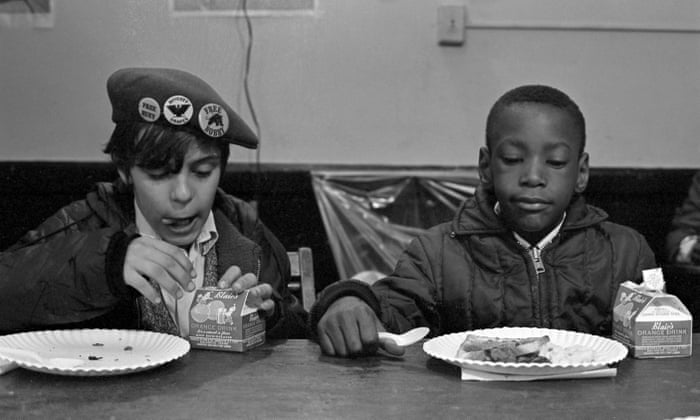 Black Panther Party was founded by Huey P. Newton and Bobby Seale in 1966, originally their goal was to end police brutality in Oakland, but after SNCC member Stokeley Carmichael began calling for the uplift and self-determination of African-Americans soon Black Power and Civil Rights was also part of their platform.

In the beginning, the Black Panther Party primarily organized neighborhood police patrols that took advantage of open-carry laws, but over time it expanded to include social programs, also. The Free Breakfast For School Children was one of the most effective. The Panthers started the Free Breakfast Program because hunger and poverty made it difficult for many poor black children to learn in school and It began in January of 1969 at a church in Oakland within weeks it was an success. The program was very simple: party members and volunteers would go to local grocery stores to solicit donations, and prepared and served the food free of charge.

School administrators immediately saw the results of the Free Breakfast program. They were shocked by how different the children were. “They weren’t falling asleep in class, they weren’t crying with stomach cramps.” Soon, the program had been launched nationwide to the parties outposts. At its height in 1971, the Black Panther Party fed thousands of children per day in at least 36 cities. In 1969 U.S. Senate hearing, the national School Lunch Program administrator admitted that the Black Panthers fed more poor school children than did the entire State of California. The Black Panthers even expanded their program to cover everything from free medical clinics to community ambulance services and legal clinics.

For the Black Panther party, it was an opportunity to challenge the increasingly negative image of them in the public's consciousness while helping the black community, but the Breakfast Program’s enormous success also drew the attention of FBI head J. Edgar Hoover, who called the program “potentially the greatest threat to efforts by authorities to neutralize the The Black Panther Party and destroy what it stands for,” He gave the FBI and law enforcement complete freedom to do what was needed to destroy the BPP.

The results were catastrophic. FBI agents told parents that BPP members would teach their children racism. In San Francisco, parents were told the food was infected with diseases; the offices in Oakland and Baltimore were raided by police officers who harassed Black Panther members in front of horrified children.

FBI and local police raids, arrests, and the murders of BPP leaders led to the closure of most Panther chapters and the end of the Free Breakfast Program in the early 1970s, but the public visibility of the Panthers’ free breakfast program put pressure on political leaders to feed children before school. The USDA did pilot free breakfast efforts in the mid 1960s but the program exploded in the early 1970s almost immediately after the Black Panthers’ programs were destroyed. The Panther’s Free Breakfast Program spotlighted the failure of the national School Breakfast Program and helped put public pressure on Congress to authorize expansion of the program to all public schools in 1975. Today, it helps feed 14 million children before school.