February 3, 1870, The 15th amendment was ratified granting African American men the right to vote.
In 1867, following the Civil War, the Republican led Congress passed the First Reconstruction Act. The act divided the South into five military districts and outlined how new governments based on universal male suffrage were to be established.
With the adoption of the 15th Amendment, a voting African American community helped in the Southern states to elect the Republican Party to power, which brought about radical changes across the South.
By late 1870, all the former Confederate states had been readmitted to the Union, and most were controlled by the Republican Party thanks to the support of Black voters. That same year, Hiram Rhodes Revels became the first African American to sit in the U.S. Congress.
By the mid 1870s, Northern commitment to Reconstruction waned. Northern whites wearied of the turmoil of Reconstruction. Many began to believe that peace would occur only if the Southern whites, particularly the planters, controlled Southern state governments.
After 1872, the federal government became increasingly unwilling to use federal troops to stop violence against Black voters. In the same year, Congress also gave back the right to vote to most Confederate supporters.
Democrats then took control of state governments in the South. These white legislators enacted various methods of keeping blacks from voting. Moving polling places into white areas and passing poll taxes and established property qualifications for voting.
The Compromise of 1876 marked the end of Reconstruction. It also meant that white southerners would now disenfranchise southern Black men without federal interference. 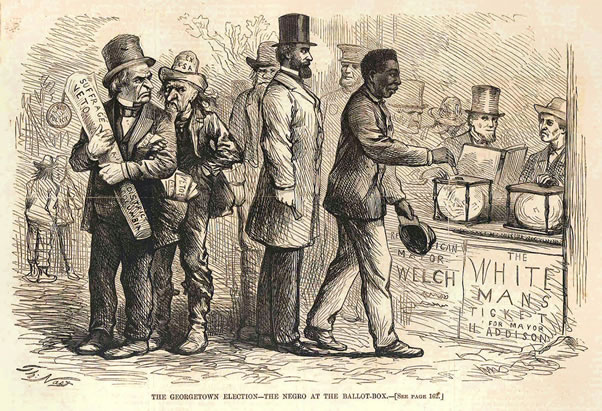