Kwame Ture was born June 29, 1941, He was a civil rights activist and originator of the slogan, “Black power.” 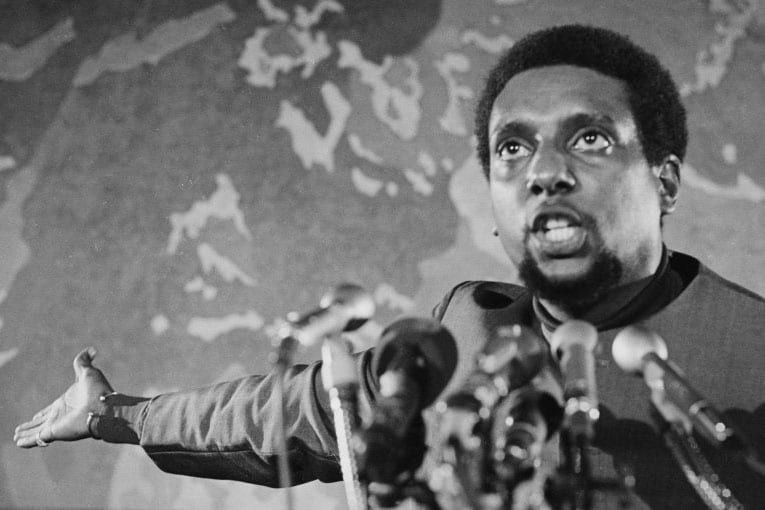 Kwame Ture was born June 29, 1941 in Port of Spain, Trinidad, He was a civil rights activist, leader of Black nationalism in the United States in the 1960s and originator of the slogan, “Black power.”

Stokely Carmichael immigrated to New York City in 1952, were he attended high school in the Bronx, and later enrolled at Howard University in 1960. This is where he joined the Student Nonviolent Coordinating Committee (SNCC) and the Nonviolent Action Group. In 1961 Carmichael joined the Freedom Riders who traveled throughout the South challenging segregation laws on interstate transportation. This led to him being arrested and jailed for about 50 days in Jackson, Mississippi.

After graduating from Howard University in 1964, he continued to work on the civil rights movement. In the summer of 64' he joined SNCC in Lowndes county, Alabama, for a voter registration drive and helped to organize the Lowndes County Freedom Organization, which was an independent political party. A black panther was chosen as the party’s emblem, The logo would later be adopted by the Black Panther Party.

During this time, the SNCC supported the nonviolence approach to desegregation but Carmichael began becoming increasingly frustrated after the beatings and murders of several civil rights activists. In 1966, after he became the chairman of SNCC, during a march in Mississippi he rallied demonstrators around the “Black power” movement, which was based in self-defense tactics, self-determination, political and economic power, and racial pride. This caused a split from King’s ideology of nonviolence and racial integration was seen by some moderate Blacks as detrimental to the civil rights movement.

During this period, Carmichael was targeted by COINTELPRO that focused on black activists; the program promoted slander and violence against targets Hoover considered enemies of the government. Carmichael accepted the position of Honorary Prime Minister in the Black Panther Party, while remained on the SNCC staff. he worked to try to merger the SNCC and the BPP. In March 4, 1968 memo from Hoover states his fear of the rise of a Black Nationalist "messiah", it stated Carmichael alone had the "necessary charisma to be a real threat in this way".  In July 1968, Hoover stepped up his efforts to divide the black power movement. Declassified documents show he launched a plan to undermine the SNCC-Panther merger, as well start rumors that Carmichael as a CIA agent. This led to Carmichael being expelled from SNCC in 1968, and the Panthers starting to denounce him.

After leaving the SNCC in 1968, He then traveled abroad speaking out against political and economic repression and denouncing U.S. involvement in the Vietnam War. Upon his return, Carmichael’s passport was confiscated for 10 months. So in 1969, He left the United States for Guinea and changed his name to Kwame Ture in honor of, Ghanaian Kwame Nkrumah and Guinean Sékou Touré. Carmichael helped to establish the All-African People’s Revolutionary Party, a political party dedicated to Pan-Africanism and the plight of Africans worldwide.

He made frequent trips back to the United States to advocate pan-Africanism as the only true path to liberation for Black people worldwide, While maintained a permanent residence in Guinea for the rest of his life. Carmichael was diagnosed with prostate cancer in 1985, He died on November 15, 1998, at the age of 57.